Ammoniacal Nitrogen is extremely soluble in water, reacting with water to produce ammonium hydroxide and one of the transient constituents in water as it is part of the nitrogen cycle, which is influenced by biological activity. The total nitrogen (TKN) content amounts to about 15% to 20% of the BOD5 in domestic effluent. Appended below is an approximate composition of medium strength domestic wastewater in terms of Nitrogen and its constituents.

There are various sources of ammonia in rivers as follows:- 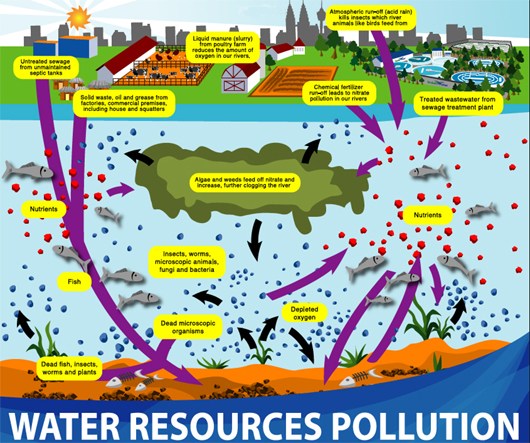 Excessive ammoniacal nitrogen in waterways can cause taste and (pungent) odor problems, apart from introducing a psychological problem to consumers, who will be under the impression that the water source is contaminated with sewage, even though this is not the case.

Some of the methods used for ammoniacal nitrogen removal are air-stripping (volatilization of gaseous ammonia), breakpoint chlorination (adding chlorine to oxidize ammonia) or ion exchange (type of clay - clinoptilolite for removal of ammonia). It can also be removed from water sources at the raw water intake point or in a wastewater treatment plant. The rate of removal of ammoniacal nitrogen is dependent on the self purification of the waterways/rivers, requirements of the effluent discharge or state of the art technology adopted by potable water treatment plants.

One of the most critical sources of pollution is from septic tanks and pour flush lactrines. There are over 1.2 million septic tanks in Malaysia and only 30% are well maintained i.e. sludge is removed regularly from the tank. Many users of this system neglected their responsibility to ensure that the sludge is removed regularly. Hence, accumulated sludge pollutes the waterways.