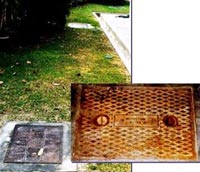 Area with connected sewerage service will have manholes along the public road and is covered with a round metal cover. In the manholes, which are about 3 meters to 6 meters deep, are sewerage pipes connecting premises to the sewage treatment plant. Whenever there is any blockage, the inspection and clearing works are performed these manholes using high-powered vacuum and high pressured water hose. The public is strictly prohibited from opening any manhole cover without authorization from IWK or the National Water Services Commission, Ministry of Energy, Green Technology & Water. Please contact IWK at 03-20832828, if you notice such dangerous act by unauthorized individuals.