To Be The Most Efficient & Environment Caring Sewerage Company

As the national sewerage company providing sewerage services to over 18 million users in the country, IWK takes great pride to present IWK’s 2004 initiatives, achievements and challenges in managing the public sewerage systems.

As at December 2004, the company operates and maintains 8,414 public sewage treatment plants and network pumping stations, 14,148 km of underground sewerage pipelines, providing scheduled desludging services to over 350,000 individual septic tanks as well as planning and developing a sustainable sewerage infrastructure and systems for the nation.

IWK's commitment to the environment is internalized into daily operations. With a view to relentlessly improving the sewerage services performance, all available resources and efforts are focused on:

IWK is committed to provide efficient sewerage services to all customers. With a view to fulfill this commitment, problems such as spillage caused by blockage, broken pipes or malfunctioned pumps and other related equipment; nuisance at sewage treatment plants and requests for desludging services; are acknowledged or addressed within a reasonable time frame.

In 2004, a monthly average of 3,200 sewerage services complaints was registered and over 90% were resolved within the Level of Service as stipulated in the Customer Charter. Besides complaints over 6,300 requests for cleansing of septic tanks, 2,100 written enquiries on billings and services as well as 26,500 calls were received for the whole of 2004.

As a Standard Operationg Procedure, all enquiries, requests or complaints are acknowledged within 24 hours. However, for billing related matters, the resolution for any billing adjustment will only take effect in the next monthly bill for Commercial, Industrial and Government accounts or six monthly bills for house. 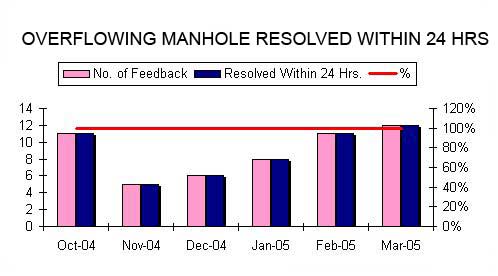 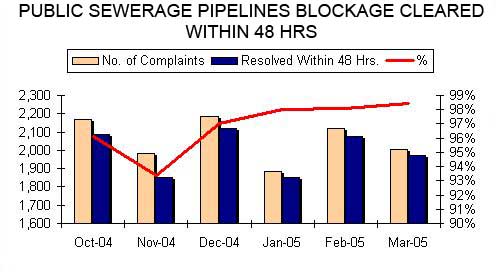 These are planned sewerage works to rehabilitate dilapidated and old sewerage facilities to improve the sewage treatment processes and ensure that the effluent released back into the water courses are environmentally safe. Over 3,300 dilapidated public sewage treatment plants nationwide have undergone refurbishment and another 2,300 is undergoing refurbishment or upgrading works in phases for the next few years.

The effluent from the public sewage treatments are regularly monitored and tested in three laboratories in Kuala Lumpur, Perak and Melaka to ensure constant and consistent compliance of the Biological Oxygen Demand (BOD) and Suspended Solids (SS) standards.

The combined environmental performance results as at end of December 2004 were within the total permissible limits as follows:

Thanking you in anticipation of your support towards our joint responsibility to preserving the environment and water resources.